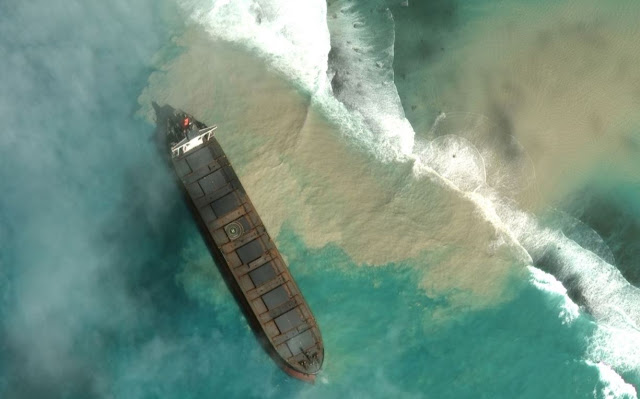 A bulk carrier ship, MV Wakashio, that recently ran aground off the southeast coast of Mauritius has been spilling oil into the sea, as seen in satellite images captured by Maxar Technologies on Aug. 7, 2020. The spill didn't happen immediately. The MV Wakashio became stuck when it collided with the coral reef about 2 miles (3.2 kilometers) off the Mauritius coast. After the ship ran aground, its crew was safely evacuated. Since then, efforts to stabilize the ship and pump out the oil have failed, all while the Indian Ocean's rough waves have battered the vessel, Maudhoo and environment minister Kavy Ramano told The Guardian. It wasn't until this past week that oil — spilling from a new crack in the ship's hull — began gushing into Mauritius' blue lagoons — waters that attract international tourists and support the nation's fishing industry, according to The New York Times.

Nagashiki Shipping, the company that owns the MV Wakashio, said that salvage efforts were on hold due to poor sea conditions, but that it was monitoring the situation, The Guardian reported. "Nagashiki Shipping takes its environmental responsibilities extremely seriously and with partner agencies and contractors will make every effort to protect the marine environment and prevent further pollution," the company said in a statement, as reported by The Guardian. Even though the ship is owned by Nagashiki Shipping, the 984-foot-long (300 meters) vessel, built in 2007, flies the Panama flag.  Read more.
By Syndicated Maps at 8/19/2020