Birthday party on oil tanker ship may have led to the oil spill in Mauritius, Panama regulator says
According to investigators from Panama, the country under whose flag the vessel was sailing, a Japanese ship running aground on a coral reef off Mauritius may have changed course to get a mobile data signal for a birthday celebration onboard.  Must have been a bad dead cell zone!
On July 25, the M.V. Wakashio crashed into the barrier of coral reefs and spilled nearly 1,000 tons of oil into Mauritian water.
The captain of the vessel was taken into custody on Aug. 18 for endangering safe navigation, as Mauritian authorities said the vessel had failed to respond to many Mauritian Coast Guard calls.
Mitsui O.S.K. Lines (MOL), the Japanese company operating the ship, has pledged 1 billion yen ($9.5 million) for environmental preservation efforts and to shore up local fisheries.
Due to birthday celebrations on board at the time, a Japanese ship that wrecked off the coast of Mauritius in July and caused one of the worst environmental disasters in the country's history could have run aground.
“The change, of course, is produced by indications of the captain of the boat, who gave instructions to approach about 5 miles away from the coast of Mauritius, looking for a telephone and internet signal, so that the crew members could communicate with their families,” the AMP said. 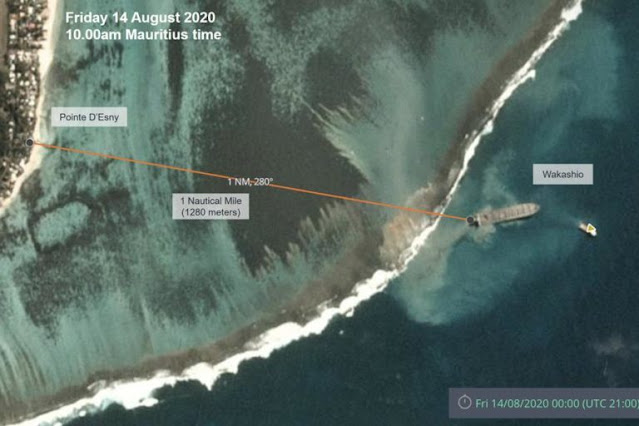